Using a barcode scanner to turbo-charge your collection 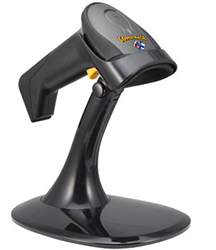 All Barcode Scanners on Sale Through April 14!

As anyone who's used ComicBase knows, entering in your books is as simple as locating the issue in the database, then telling ComicBase how many copies you have. But sometimes, figuring out which book you've got can be surprisingly difficult--especially if it's the silver-holo-foil-alternate cover variant of the seventh restart of a popular series.

Luckily, almost all comics published since 1992 (and some from earlier) let you eliminate all that guesswork--as well as all the typing--by simply using a barcode scanner to automatically look them up in ComicBase and add them to your collection.

With ComicBase 17, entering your collection into the database is simply a matter of "blipping" in the barcode on your comic books with a barcode scanner. Serious collectors love our barcode scanners as they turn hours of tedious data entry into a matter of just a few minutes.

While any edition of ComicBase works with our barcode scanners, ComicBase 17 Professional and Archive editions have a special Batch Entry mode (Batch >Add Comics to Inventory…) which lets you scan in the codes from an entire batch of comics altogether. Once you’ve got all the barcodes scanned, all it takes is a single click of the Save button to log all of them into ComicBase

Best of all, until April 14, all ComicBase barcode scanners are on sale! Get our professional hands-free DX laser scanner for only $129.95 ($40 off!), or our best-selling budget CCD scanner for only $89.95 ($20 off!). And if your weekly update subscription has expired, pair your new scanner with the latest edition of ComicBase and save even more.

Comics writer Bob Haney rarely let continuity or logic impede his storytelling and there are dozens of examples that we could use for a Comics Conundrum. However, this month, let's whistle by the graveyard as we look at a pair of panels written by Haney with similar dialogue written for two consecutive issues of The Brave and the Bold.

In The Brave and the Bold #128 (Jul 76), Batman teamed with Mister Miracle to stop the kidnapping of a shah. Along the way, the duo ran afoul of Granny Goodness and Mister Miracle exclaimed, "Granny Goodness! I'd know that hag's cackle in my coffin!" A strange turn of phrase, but not really notable.

However, in the very next issue, The Brave and the Bold #129 (Sep 76), Batman and Green Arrow tangled with The Joker and Two-Face, where the two villains had hijacked a jet. When The Joker radioed his demands to Gotham City, Batman said, "It's The Joker all right -- I'd know that skin-crawling laugh in my grave -- and a joke by him is always for real!"

So, coffin/grave, but basically the same turn of phrase in back-to-back issues. You would think a more original identifying qualifier could be issued, wouldn't you?

Amazing Spider-Man #15 (Aug 64) has been climbing in recent weeks, from $2,325 to $4,100. Although several members of the Sinister Six are set to make appearances in Amazing Spider-Man 2, which opens in early May, it's unknown if Kraven the Hunter, who first appeared in this issue, is among them.

Speaking of movies, we're seeing an upward trend in prices on issues of Captain America (5th series), especially #8-15, the issues that introduce the Winter Soldier. The character also appears in the second Captain America movie which opens as this issue of ComicBase Confidential goes to press.

It's a little early to absolutely call it an upward trend, but keep an eye on issues of Guardians of the Galaxy (3rd series) and Sin City: A Dame to Kill For. In the latter series' case, several trade paperback collections have kept the values of the individual issues low, but there should still be some added interest among collectors as the second Sin City film nears its August release date. In the case of Guardians of the Galaxy, while the short-lived ongoing series should generate some positive action, we've also seen prices moving up on Incredible Hulk #271 (May 82), Rocket Raccoon's second appearance, which is now at $120.

Tech Tip: Save Money by Calculating Your Cost Basis

Have you sold comic books over the past year? Unfortunately, the tax man is likely to expect you to report those sales as income—but you only have to pay taxes on the difference between what you paid and the price you sold it for. And if you sold off your comics for less than the original purchase price, you may be able to claim a capital loss.

ComicBase isn't exactly QuickBooks, but Pro and Archive Edition users can use ComicBase’s File > Export feature to get an exact accounting of how much you made (or lost) on your comic book sales this year. Mark issues you’ve sold this year. Go to File > Export and click the Export only marked issues checkbox. As in the picture below, export the fields for Comic Title, Issue Number, Quantity, Cost, and Selling Price.

Click the Export button, save the file, and import it into a spreadsheet as a tab-delmited file. Use the spreadsheet to subtract your cost from the selling price -- and there you have it, your cost-adjusted taxable sales income!

With our export feature and custom fields, there’s no limit to how you can analyze your collection. Have fun, and stay tuned for next month’s tech tip, where we’ll show you how to use our advanced search features.