Comic boxes that are strong, stackable, and slide open like a file drawer. They’re quite possibly the most promising comic storage product since the plastic bag—but are they tough enough to stand up to the punishment our staff can dish out?

ComicBase has sometimes been called, “a program for people who have enough comics to know they have a problem.” And like so many of our customers, we definitely have a problem finding ways to store the tens of thousands of comics in our library.

With shelf space at a premium, most of the library is housed in traditional comic long boxes. These are then arranged in huge, but fairly orderly stacks wherever space permits. Unfortunately, this tends to make filing the hundreds of new comics which come into the offices each week a real bear of a job, requiring enough lifting and shuffling of boxes to leave us either groaning in pain, or more frequently, looking for any available excuse to put off this chore until the backlog of unfiled comics reaches crisis proportions.

Needless to say, we were more than a little interested in the new Comic Book DrawerBoxes that creator Rich Vincent was demonstrating at this year’s San Diego Comic-Con (see our photo gallery entry). Basically, a DrawerBox is a heavy-duty long box which slides into a reinforced “shell”. This combination allows you to stack boxes up to six boxes high, while still being able to instantly access any one of the boxes’ contents without needing to break your back rearranging stacks of heavy comic boxes.

As soon as we realized what we were looking at, we put in an order for eighty of them. In retrospect, I wish we’d ordered more.

DrawerBoxes come in three parts: the drawer (akin to a regular long box), the shell, and two reinforcement pieces (“sleeves”) which make the already-strong sleeve even more sturdy. The pieces are formed from 300 lb-test cardboard, itself a great deal more solid than the material used to make common long boxes. As a minor downside, all this extra strength comes at the cost of an extra pound or so of weight, something which is worth keeping in mind when factoring in shipping charges.

The box itself is ingeniously designed, giving double or even quad-ply reinforcement to key parts of the box, including the all-important handle area. Vincent deserves extra credit for using what would otherwise be scrap areas of the design to form punch-out title dividers.

One area where the design comes up a tad short, however, is in the setup instructions which, while funny, aren’t entirely clear when it comes to describing the low-level origami which is required to properly assemble all the pieces. Thoughtful folks that we are, however, we’ve put together our own photo setup guide to show you the necessary assembly steps. Although the process is necessarily a bit more complex than with a regular comic box, it’s possible to assemble boxes in just a minute or two each once you’ve mastered the technique.

But How Strong Are They, Really?

Part of the in-person demo that Rich Vincent gave at Comic-Con was to jump up on to of an assembled DrawerBox, and ask one of the people watching to pull out the drawer. The crowd would then gasp a bit as the drawer easily slid in and out while Vincent stood atop it, with both he and the box unharmed by the experience.

Now Rich is a pretty light guy, and we very much wondered whether our team of much-heavier box-luggers would be able to do the "striding the box" demo ourselves. Sadly, our first potential box-strider stepped up directly in the middle of the shell, putting all her weight on the weakest point of the box. As could be expected, the box began to buckle.

The boxes certainly are strong, but the load-bearing strength is concentrated along the heavily reinforced edges--not the flat top surface of the shell pieces. For this reason, how high you can stack the boxes depends very much on how straight the stacks are. When a 200-pound staffer climbed atop a box with his feet placed near the edges, we were indeed able to replicate Vincent’s demo.

With properly aligned stacks, we were indeed able to stack the boxes six high, fully loaded, and move the drawers of the lower boxes in and out freely. This means that the bottom boxes were each able to handle a load of some 240 pounds, properly distributed. That’s pretty strong.

Once assembled, stacked, and loaded up, the DrawerBoxes performed admirably. The front handles of the drawers never came close to binding even after numerous pulls of fully-loaded drawers (a real problem with conventional boxes). Best of all, they lived up to their promise of making comic filing far quicker and easier than with conventional comic boxes. 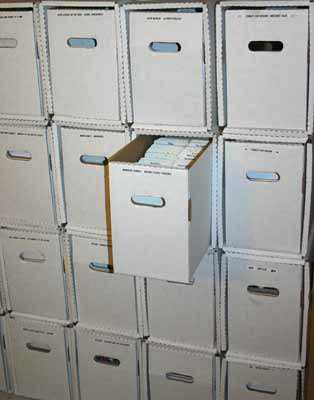 We set up a test of filing times, measuring the average time an experienced staffer required to file a random comic in a box positioned in the midst of a stack of comic boxes. After filing, the test required that the stack be returned to its previous condition (including replacing any removed lids).

When the target comic box was positioned second from the top in a stack of comic boxes, our staffer could file it in an average of about 32 seconds. When the target comic box was four boxes from the top, however, it required an average of 1:29 to file each comic. The DrawerBoxes, however, did not require any box-rearranging or lid-replacement in order to allow for filing, and as such averaged just 21 seconds per filed comic, regardless of how many boxes were on top of the target box.

Since it was in our self-interest to abuse our staff as little as possible, our informal testing required the staffer to file only a handful of comics per round. As such the numbers shown above should be used only as a rough comparative measure. They also undoubtedly understate the actual filing times of larger batches, as fatigue would have played more of a role.

Our test also barely scratched the surface of the all-important “pain and suffering” factor which comes with the repeated shifting of large numbers of heavy boxes. Even with a test lasting for less than a half hour, our staffer was willing to classify the filing of comics in four-down boxes as an "8 out of 10" on the pain and suffering scale. Filing comics in the DrawerBoxes qualified as only “about a 2” in the qualitative pain and suffering measure.

All in all, the DrawerBoxes allowed our staffer to file comics in a fraction of the time using conventional comic boxes. We were also relieved to see that our staffer seemed far less likely to turn in a worker’s compensation claim for back strain, when they were filing comics in the DrawerBoxes.

For the purposes of being able to file and maintain a collection as large as ours, switching from conventional comic boxes to DrawerBoxes was an absolute slam dunk.

Having become big fans of the new boxes, we thought we’d share a few extra tips should you decide to convert your own collection to using DrawerBoxes:

Where to Get Them

The DrawerBoxes retail for $9.00 per box, but to realize the best value for shipping they are offering a 5 unit case for $43.75 plus shipping of $16.50 per case ($21.50 if shipped east of the Mississippi).  Shipping discounts may be available for orders of 20 or more to the same location (call for details).